DIABLUS IN MUSICA are one of Spain’s most promising Metal bands; through their engaging live shows and enticing music they are starting to gain the exposure and recognition worldwide. I managed to speak with lead vocalist Zuberoa Aznárez about their first ever UK tour, their musical influences and views on the term “female fronted metal”. 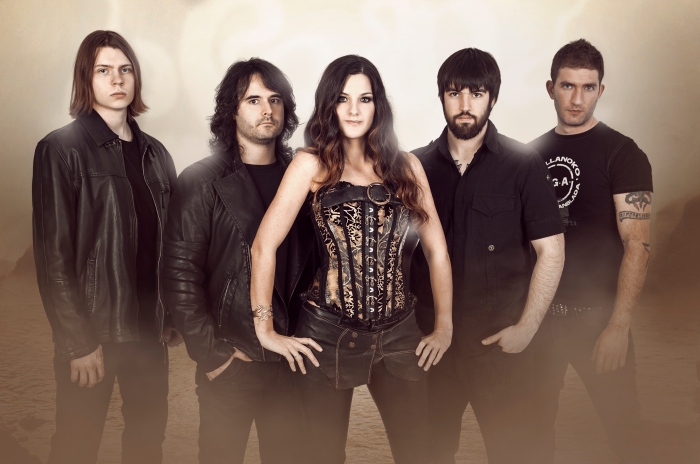 How is your tour with Leaves’ Eyes going so far?

We have just finished it and it has been great! We have had a fantastic time, we have meet old fans and new ones and the sells also went really well, so that’s for sure a good sign that people liked pour performances.

Southampton was your first UK show and it was exhilarating; were there any fans from the UK wanting to see you for a while?

Yes! We were very happy and surprised to see some people with our t-shirts and sang our songs live too. It was our first time in UK, so we actually didn’t know what to expect. We were so happy with the welcome!

I am curious to know who your musical influences are; I was impressed you were able to bring a fantasy type atmosphere to a small venue.

Thank you! We like many different styles of music, of course metal and classical are our main influences, but I’m for example also a big fan of World music, folk, ambient stuff and soundtracks. Our music reflects all these influences. I always try that our albums are varied, with different songs that are able to express different feelings and make the imagination of the listener fly through different worlds.

How is your first trip to the UK going so far?

I would say that the UK part of the tour has been maybe the best. As I said it was our first time here and the venues were almost full, the audience really warm and we sold really well. We are looking forward to visiting you again!

Has there been a favourite city?

Unfortunately when we are on tour, we have no time to visit the cities. It is something that I would have really loved to do. In Glasgow we were no far from the Cathedral so Gorka and I could go fast and see it before sound-check, it’s really beautiful! We could also walk a bit in London, close to the London tower. I had been in London before, but I would have loved to see more of the rest of the cities. Regarding the shows it went really well in every venue!

Have you noticed any similarities and differences between Spain and the UK regarding the Metal scene?

Symphonic metal in general is not a very popular style in metal (apart from the very big names), but in Spain it’s even less popular. In Spain, metalheads prefer heavy metal from the 80’s and sung in Spanish. I don’t really know about the metal scene in UK, so I couldn’t say…

Since there has been some debate about this, what is your opinion on the term female fronted metal?

I don’t like that term at all and I don’t believe in that genre as a genre. Music is music and metal is metal, regardless the sex of the singer. I can accept the term “symphonic metal” when we are talking about mixing classical music with metal as we do, but never “female metal”, this doesn’t define the music, there are female fronted metal bands that played death metal, metal core, rock, symphonic so they haven’t got anything in common musically wise.

What does 2016 hold for Diablus In Musica?

Hopefully a new album in the fall. We will start working on it now. We have also some new dates for next year, but our priority will be the recording of our new album. We hope we can tour again to present it live!

Thank you time out today to talk to me today.