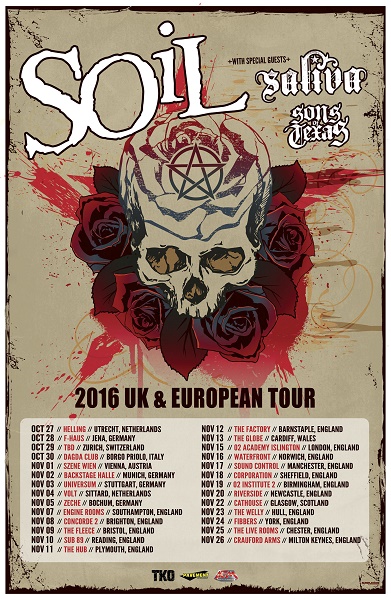 Southampton’s The Engine Rooms plays host to many great events; roller discos, themed nights you name it. Most of the rock and metal community also know that it’s showcases some of the best bands within this genre. Monday night, American Alternative Rockers SOIL, Southern Rockers SONS OF TEXAS, West Midlands Hard Rockers LIBERTY LIES and local troupe LONELY DAKOTA took to this glorious stage like ducks to water. It’s nights like this that show us it doesn’t matter what day of the week it is, punters are always keen to support their idols and the scene itself.

LONELY DAKOTA kicked of the proceedings for this evening of Rock. They are based in Southampton, UK and they proved to get the wheels moving very smoothly. Their energetic stage presence showcasing their clear vocals, great guitar work and powerful drums only proves that they were a fine choice to open up the night.

West Midlands Alternative Rock outfit LIBERTY LIES got off to an interesting start, it included an opening track consisting of what one could describe as chipmunks giggling. Don’t be fooled. It is the thing that entices the audience to find out what this band is about. Their set consisting of clear crisp vocals, excellent guitar riffs and their crowd interaction was amazing. The crowds were rightly taken within their stage presence and brilliant music.

For Texas troupe SON OF TEXAS it was their first time touring the UK and they were filling in as main support after SALIVA pulled out due to illness, so the pressure was on. After Monday night’s performance it is more than safe to say they will be welcomed back with open arms. They gave Southampton a treat; their eclectic selection of melodies contained a raw, rough sound that evidently went down well with the punters that very night. Think of CLUTCH, BLACK STONE CHERRY and REV THEORY jamming together, that’s the sound you hear from this Southern Rock outfit. Any band that has a guitarist that can perform with a blindfold on deserves that utmost respect; the perfect choice as main support for SOIL.

SOIL are one of those bands that doesn’t need an introduction; they are often on the touring scene wowing audiences with their straight up, no nonsense rock sound. Southampton’s show was no exception. Their solid performance and front man Ryan McCombs’ interaction with crowds was incredibly amazing to watch. They performed an amazing selection of material from across their discography; from their newer anthems such as ‘The Hate Song’, ‘Shine On’ and ‘Amalgamation’ to fan favourites from the beginning such as opener ‘Wide Open’, ‘Redefine’ and ‘Give It Up’ there was something for everyone that evening. They are a definition of what doesn’t kill you makes you stronger; as most of you know frontman McCombs suffered a stroke two years ago and SOIL’s performance Monday night was just top notch.

A great night of Alternative Rock from all the bands; they all showcased great crowd interaction, infectious energy and a firm, solid sound throughout.