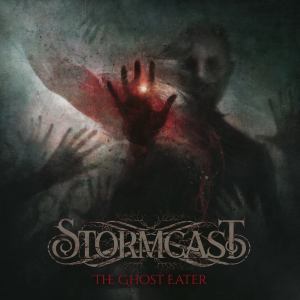 If GOJIRA and OPETH had a conspicuous love child, STORMCAST would be it. The Atmospheric Death Metal force are back, and they bring fourth an intriguing token of wonder. This comes in the form of their upcoming album The Ghost Eater. It shows a new side of the band that still contain hints of their previous sound. Atmospheric is a more than appropriate term to describe this record as when listening to the record, it heightens the senses when taking in your surroundings. Perfectly suited for the colder weather and darker evenings that autumn has brought upon us.

As mentioned before, The Ghost Eater will show a new side of the band whilst keeping to the STORMCAST roots. This is the first album with a new line up. This release is more progressive and technical than their previous album Frame Of Mind with hints of the prior STORMCAST aesthetic.

Hyperion translates from Ancient Greek as the high one and that is how the opening track makes you feel. The bombastic guitar work and dominant vocals give us that empowerment that a lot of us need. Especially today where there is a lot of political uncertainty and personal struggles, there has never been a bigger need for reassurance. Hyperion really helps the listener to engage and gives that inspiration behind taking risks without regret.

The album’s single Resonance provided us with a glimpse of the new sound that STORMCAST have now portrayed. The lyric video released shows the important messages that need to be listened to and considered. For example, the lyric “with you in sight, we can accomplish all” is a strong message; stay united with your peers and you can overcome struggles and win battles you are facing. If the sheer force behind the brutal vocals, impeccable guitar work and rampant drums isn’t enough to drill that message across then who knows what will.

The Apprentice is one of the most technical tracks on the album and one with some great elements.  From the pulsing heartbeat to the prevailing Black Metal vocals, these different elements fuse together to create this brilliantly thought-provoking track.

Lushai Hills is the equivalent of the phoenix rising from the ashes. From the first few seconds, the ambience is created, and it has you transfixed. Even with the sheer brutality that’s it in the track, this is an uplifting track in its own way. The Black Metal vocal technique part way through give fans that the initial STORMCAST sound is here to stay and doesn’t plan on going anytime soon.

These are just a few of the tracks that The Ghost Eater has to offer. When bands decide to go in a different direction with their sound, it can often be a hit or miss. In the case of STORMCAST it was most certainly a hit and the new sound worked highly in their favour. Their balance between a new direction and keeping to their roots was spot on, The Ghost Eater is concrete evidence of this.

The Ghost Eater is set for release on Friday 26th October. Click here to pre-order.