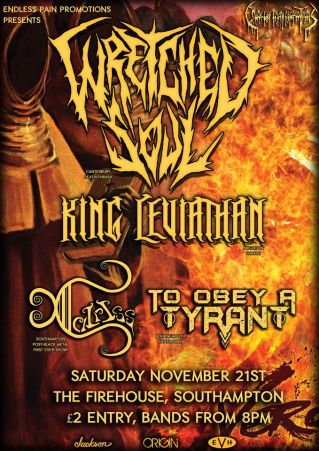 Local gigs at small venues in your home town can often be hits and misses when it comes to crowd size; however the beautiful thing about the underground metal scene is the audience will go crazy for the bands no matter how small the crowd is. Saturday night’s show at The Firehouse, Southampton proved this theory correct as they played host to rising Death/Thrash quartet WRETCHED SOUL where they showcased a top class live performance along with equally brutal and loud allies KING LEVITHAN, CAIRISS and TO OBEY A TYRANT.

It was great to see two hours before the show The Firehouse was already filled with punters either getting their first drink on a Saturday night to get in from the cold, crisp wind as bands were loading in gear and settling in. It was a relief to see the same punters stayed in to experience a night of full on quality metal.

The first band to kick off the proceedings were Bournemouth Deathcore outfit TO OBEY A TYRANT; musically there is definitely a lot of potential within their sound that will definitely ensure a growth in their fan base. There were a few nods from the crowd as the music blared throughout The Firehouse and people definitely showed appreciation for their passionate, energetic performance. Whether it was still early on in the evening or whether more crowds were coming in from the icy cold weather, it didn’t spark a crazy atmosphere as expected but overall not a bad performance from the group.

Southampton based CAIRISS were up next to show The Firehouse what they were made of; it was their first ever show and there was already a huge crowd so understandably nerves and anticipation was in the air. They needn’t have worried; the first sombre tones from the guitars and soft drum patterns gave off an OPETH type vibe where it’s completely relaxing but at the same time mesmerising. We then hear beautiful, angelic vocals from lead singer Freya-Jane Brown that are almost hypnotic mixed wonderfully with the suddenly Black Metal-esque blistering guitars and roaring drums. Something that wasn’t expected was the high pitch screams from this exceptionally talented vocalist; a woman in metal who can sing like an angel and scream like a banshee perfectly certainly deserves a lot of respect and recognition. For their first show it was a fantastic showcasing of local metal, just goes to show you remarkable talent can be found on your doorstep.

The cult of KING LEVIATHAN have been an ever growing presence in the metal community ever since their formation last year; with a performance at this year’s Bloodstock under their belts and impending appearances at some of underground’s hottest festivals such as Thrashasaurus to say they are doing well for themselves would be a huge understatement. If Saturday night’s show is anything to go by you can probably see why this is. Their stage attire consisting of battle clothes and war paint is enough to cause wonder and anticipation. From the moment the first blistering guitar riff and deafening vocals from “Wormwood” are heard its clear the cult of LEVIATHAN are in control of their cult of metal worshippers.  The mighty LEVIATHAN proved to be the perfect choice for main support as if the vast amount of head banging and fist pumping going on in the crowds doesn’t say this who knows what will. They did a whole lot more than get the crowds warm and pumped up ready for headliners WRETCHED SOUL.

Hailing from Canterbury, a new breeding ground for Metal in the UK, WRETCHED SOUL have gained a solid fan base over the past few years through their Blackened Heavy Metal. They proved their website claim of “fast-gaining a national reputation for their intense and genuinely engaging live shows” absolutely spot on Saturday night through a live show that tore the roof off The Firehouse. From the first opening notes of the thunderous “Bury The Hectic” to the marching beats of “Undying War” it was clearly evident who was in control of that venue Saturday night; those who witnessed this fantastic dominance would know that the crowd were punching the air and shouting at vocalistsChris Simmon’s command that can definitely be perceived as clear authority.

WRETCHED SOUL had the crowds engaged from the word go; their infectious energy, finger bleeding guitar work, prevailing vocals and a passionate stage presence tick all the boxes for a top notch live show. It was their first time performing in Southampton and judging from the attentive response of Southampton’s metal heads it most definitely won’t be their last live show in Southampton either.

It certainly a night Southampton’s metal heads will not be forgetting anytime soon; each and every band gave an extremely passionate performance to an extremely attentive crowd throughout. It’s reassuring to know the underground metal scene is alive and kicking, nothing will beat it.