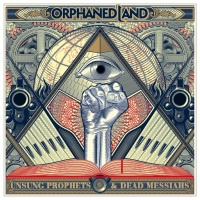 It’s a brand-new year, meaning a brand-new start and to kick those post-Christmas blues. 2018 looks to be a very promising year for new releases and upcoming tours within the rock and metal world. After five long years, hugely respected Israeli breakthrough act ORPHANED LAND have released their sixth studio album Unsung Prophets & Dead Messiahs and it is one of their most profound works to date.

Within the past few years, there has been talent emerging from Israel and other parts of the Middle East. ORPHANED LAND have been a very dominant presence on the metal scene for over two decades. For the duration of these decades, they have been described as Israel’s breakthrough band and the pioneers of oriental metal. They have worked tirelessly to spread the message of peace and unity, winning three international peace awards along the way. Throughout the course of their career, they have united fans across the Middle East and beyond with their powerful music.

Today there is continuous conflict and dark political agendas that are casting shadows on an international scale so the message behind ORPHANED LAND‘s new sounds have never been more relevant and could not have come sooner. The album is inspired by the writings of Plato and the thwarted aspirations of peaceful revolutionaries throughout history. This album displays this message loud and clear through their choices of using sound effects like white noise and beeps to censor the message, like today in modern society. Even with the right to freedom of speech in most parts of the world, if it’s supposedly the wrong message and information, it’s quickly thwarted and shut down.

The album contains a huge array of melodies that merge into one incredibly well. Each song contains something different that makes each one revolutionary; for instance, you have the defiant sounds of We Do Not Resist, the soft and authentic All Knowing Eye and the sweeping Take My Hand. The single We Do Not Resist is interesting. It’s a powerful number with a deep message, they added the censoring to certain parts of the song themselves to add to the concept of trying to deliver a message but being silenced by the system.

All Knowing Eye allows the listener to take a break the heavy distortedness and immerse into the authentic beauty of the record. This could be the song that shows that there is a peaceful, united vibe about trying to get these messages across or indicates the sadness of not being to do anything because the message hasn’t gotten across to those who need to hear it. This song has a stunning melody and helps one to reflect upon thoughts. The acoustic riffs on the guitars are particularly memorable and beautiful and they complement the vocal work very well.

The marching beat in Take My Hand reminds one of people taking a stand and starting a revolution or an army following orders given to them. This phrase particularly reminds one of helping someone up when they have fallen or to lead you to your supposed path. This track is a fantastic, pumping melody that will go down very well at live shows and will make your walk to work seem like a revolutionary task.

It’s high time that the world needs to hear the messages that the system is trying to thwart, censor and suppress. Unsung Prophets & Dead Messiahs is that work of art that will ensure the world will hear and take note of the messages that they are trying to get across to the world. This new record will keep up the fighting spirits and the revolutionary force to keep on going spreading the word. We Do Not Resist.