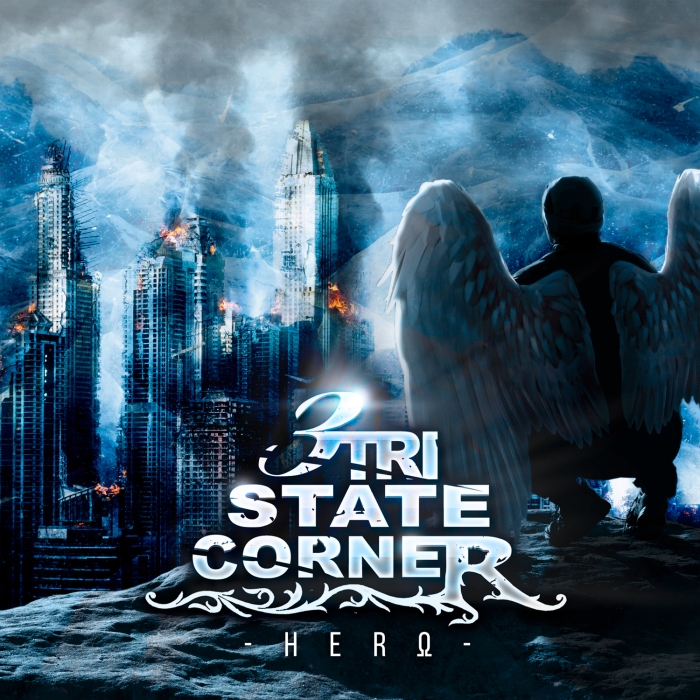 Tri State Corner release their new video ‘Downfall’, the second track from their new album ‘Hero‘, set for release on April 27th on Drakkar Entertainment. You can check out the video here:

‘Breaking News’ is about today’s world situation and it poses the question in what direction mankind is headed. Vocalist Lucky comments: “It is a summary of the permanent interplay of opposites: rich/poor, war/peace, power/powerlessness, surplus/poverty, values/indifference, fear/courage, hope/hopelessness etc. In the context of the album it means that, due to the fear of change, we would rather continue to follow existing patterns instead of turning away and perhaps aim for a better or more peaceful path. Even if we know that the course of events is questionable, we seem to avoid being taken out of our comfort zone and instead keep on following the familiar, but perhaps not right way.”

13 years ago, five guys from Greece, Poland and Germany set off to revolutionize the music scene by integrating a Greek lute, ‘a Bouzouki’, into their catchy rock songs, and by equipping their mainly English lyrics with passages sung in the Greek language. In the meantime, TRI STATE CORNER with four studio productions and 450 live shows under their belts, have long since become an established force in the musical landscape and have built up a large and still growing fan base, not least because of their unique selling point, the Bouzouki, and their many captivating and entertaining live shows.

In between the last album and the new output lay three years that were used relentlessly by the band and by the individual musicians. Singer Lucky was, and is omnipresent as being the drummer of his second “baby”, the German power metal legend RAGE, TSC- drummer Christos also plays in REFUGE in the same position, and guitarist Brat was heavily involved in the last studio productions of the before mentioned bands as well as in other projects. Still, TRI STATE CORNER have displayed an increased live coverage during that time by presenting their music at festivals, individual shows and on support-tours. Now the band 100% driven, come forward with their fifth studio production “Hero”, in which the band remains true to its motto “emotion, aggression, tradition”.
“Hero” is the final part of the trilogy that began with the album “Historia” (2011) and continued with “Home” (2014). In this trilogy, the story of a migrant is told, who in the past departed to a foreign country to seek good fortune and eventually found it despite all the adversities – a story that still takes place everywhere in the world today. The album “Home” is the continuation of this story and there the bands describes the adventures of the descendants in the present, how they experience the world, what moves them and how they deal with it – a reflection of themselves. The new album “Hero” now shows a critical outlook on the future and continues mentally what the previous albums provided as a basis.
It is the darkest album of TRI STATE CORNER so far. Not so much concerning the musical side, but the lyrics draw a bleak picture of the future. If people do not quickly reflect on values such as respect and courage, then nothing will change and your hero will remain fiction. TRI STATE CORNER are contemporary witnesses of today, who have a critical look at tomorrow. They want to encourage to contemplate and place their finger in the wound of ignorance and bigotry, and call people in a time of causal loss of value and a two-class society to discover the hero within themselves, and to actively determine their lives again.
TRI STATE CORNER tell the sociocritical view of the current world events in fictitious, exciting stories and turn them into catchy rock songs with a Greek style. As for integration, being multi-national they have mastered the unexpected, creating a sound like nothing else?

Pre-order link for the album:  https://lnk.to/TriStateCorner_Hero