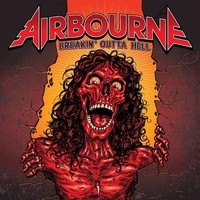 Here’s a band that don’t an introduction, especially within the Hard Rock community. Aussie born AIRBOURNE have wowed audiences with their brilliant Hard Rock tunes such as ‘No Way But The Hard Way’, ‘Too Much Too Young’ and ‘Live It Up’. They released their latest creation earlier this year; there is no doubt that it is blowing people’s minds with its powerful content.

For those of you who have been living under a rock for the past thirteen years, here’s what AIRBOURNE are all about. They formed in their hometown of Warrnambool, Australia. Their first album ‘Runnin Wild’ was the most talked about and best reviewed debuts around. Since then they have released many chart worthy records such as ‘Black Dog Barking’ and ‘No Guts No Glory’. Following in their fellow Australian Hard Rockers AC/DC’s footsteps ‘Breakin’ Outta Hell’ will ensure they stay ahead of the game.

No matter what you are doing and no matter where you are, the record itself contains some excellent material that will encourage you to let yourself go. Each track contains blistering guitar work, beats that make you want headbang and dance on the spot and prevailing vocals that encompass the best qualities from fellow Hard Rockers AC/DC and JUDAS PRIEST.

Many of the tracks on this record are more than suitable to be play at arenas and stadiums. A few examples include ‘Thin The Blood’ and ‘When I Drink I Go Crazy’, these tracks will encourage you to let go of all inhibitions and to go for it. There’s sassiness in tracks such as ‘Get Back Up’ and ‘Do Me Like You Do Yourself’. Of course no Hard Rock record is complete without fist pumping anthems; these come in the forms of the single ‘Rivalry’ and ‘I’m Going To Hell For This’.

Bearing all of the above in mind, diehard fans of AIRBOURNE and Hard Rock will not be disappointed with this release.